Feasibility of the trans-umbilical route compared with the trans-oral route in gastric upper body endoscopic submucosal dissection: A porcine model

Background: The incidence of early gastric cancer has been increasing in the Republic of Korea and Japan owing to the presence of national cancer screening programs. However, cancer of the upper body of the stomach is mostly operated on with total gastrectomy even if the tumor is within the absolute criteria of endoscopic submucosal dissection (ESD), because of the high complication rate of ESD.We planned this study to investigate a new approach in the endoscopic treatment of early gastric cancer of the upper body of the stomach.To verify (i) the feasibility of the trans-umbilical route compared with the transoral route in gastric upper body ESD and (ii) the non-inferiority of single-port LLND compared with conventional multiport LLND and (iii) the safety of 2-basin LLND (upper greater and lesser curvature) using survival porcine models.

Methods: We separated healthy female White Landrace pigs (approx. 40 kg each) into 2 groups: conventional and experimental (n = 5 per group). We performed trans-oral ESD in 2 areas (fundus and upper body anterior wall, UBAW) and multiport LLND (LN 1, 2, 3, 4sa, 4sb) in the conventional group. We also performed trans-umbilical ESDs in the same areas by gastrostomy using OCTO Port (OT301; Dalim Surg Net, Seoul, Republic of Korea). We chose the gastrostomy site that corresponds to the greater curvature side of the antrum anterior wall in humans, under pneumoperitoneum. We retracted the stomach and performed gastrostomy. We inserted the OCTO Port through the gastrostomy site to create a pneumoperitoneum. A single-port LLND was also performed in the same areas in the experimental group by using double-bend instruments. 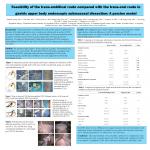