Introduction
Reduced port surgery is an emerging concept that could provide a lesser postoperative pain and offer an excellent cosmetic result. In contrast, there are some technical limitations such as instruments collision, in-line viewing and difficulties in appropriate counter-traction. The authors had reported an index case of curatively intended resection of sigmoid colon cancer with radical lymphadenectomy in this procedure. It should be careful for both safe and radical treatment to indicate for the malignant disease, however, there were few reports of its feasibility with large samples. The aim of this study is to valuate the feasibility of this procedure compared with the standard laparoscopic procedure in matched case-control study.

Methods and Procedures:
We have performed this procedure for 227 colorectal cancers since June 2009 that consist 100 right-sided colon cancers (RP-R group) and 127 left-sided colon or rectal cancers (RP-L group). The same cases with the standard laparoscopic procedure were adjusted in the same period. There was no difference in the patient backgrounds between two groups. Cases with clinical stage 0-III were indicated with exception for the case with invasion to other organs or ileus. The entire laparoscopic procedures were performed using usual laparoscopic instruments through the umbilical incision. Double stapling technique was employed for the anastomosis in RP-L group and extracorporeal functional end-to-end anastomosis was employed in RP-R group.

Results:
The procedures were performed successfully except for the three following cases. Two rectal cancers and one right sided-colon cancer needed small incision of open surgery because of bleeding or severe adhesion. There were no other intraoperative complications. Five with ileus and two with anastomotic leakage were observed postoperatively. All of these cases were recovered with conservative treatment. The median operative time and bleeding amount of RP-L and RP-R group were 178 min, 30 g and 168 min 40 g, respectively. The median harvested lymph nodes and length of resected specimen of RP-L and RP-R group were 21, 22 cm and 19, 20cm, respectively. No differences in all these results were observed between this procedure and the standard laparoscopic procedure. The scars within the umbilicus were almost invisible three months later, and almost of all patients are very satisfied with their excellent aesthetics.

Conclusion
Reduced port surgery for colorectal cancer can provide excellent cosmetic results with similar safety and oncological clearance compared with usual laparoscopic procedures. This procedure is feasible and may be promising in the future. 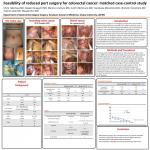