Introduction: The goal is to assess the feasibility of utilizing micro laparoscopic instruments to perform a virtually scarless Heller Myotomy.

Methods and Procedures: A 72 year old woman with chronic achalsia underwent successful laparoscopic Heller myotomy using 2.7 microlaparoscopic instruments. The patient was placed in slight reverse Trendelenburg. A total of two 2.7mm ports were introduced, one in left upper quadrant and one in the right upper quadrant. A Nathanson retractor was used subxyphoid for liver retraction. Two 5mm ports were introduced through a single incision at the umbilicus for visualization and introduction of sutures , suction irrigation and a 5mm vessel sealer. Suture needles were skied to aid in insertion. The 2.7mm instruments used were constructed with a novel titanium-ceramic shaft which reduced the deflection normally expected of micro laparoscopic instruments. The enhanced rigidity enabled the instruments to function with the integrity similar to 5mm laparoscopic instruments.

The Heller myotomy was performed in the usually laparoscopic fashion. 2.7mm grasping instruments were used to provide retraction, and a 2.7mm monopolar hook electrode was used for dividing muscle fibers.

An endoloop was used to assist in retracting the esophagus, and a 2.3mm Minilap instrument was percutaneously placed in the left upper quadrant and used to hold the loop in place. Three interrupted sutures were placed using 2.7mm instruments to laparoscopically suture repair a posterior hiatal hernia. A partial anterior fundoplication was then performed.

Results: The total operative time was 105 min. The patient received no ports larger than 3mm outside of the umbilicus. An interoperative endoscopy was performed to confirm the adequacy of the myotomy. The patient had an uneventful recovery and was discharged after a 48 hour hospitalization

Conclusions: A micro laparoscopic approach to Heller Myotomy appears feasible using only sub 3mm instruments outside of the umbilicus. This approach warrants further study as a potentially appealing option for patients that still allows for the completion of the procedure using the accepted standard laparoscopic approach. 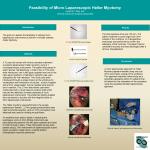