Introduction: Laparoscopic hepatectomy (Lap-Hx) has been established as an important treatment choice for liver cancers, especially hepatocellular carcinoma. However, role of Lap-Hx on short- and long-term outcomes remains unclear for intrahepatic cholangiocarcinoma (IHCC). The aim of this study was to clarify feasibility of Lap-Hx for IHCC.
Patients and Methods: IHCC of less than 10 cm in diameter, which located in the left lobe and had no macroscopic vascular invasion, is indicated for Lap-Hx including hybrid method. Lymph node dissection was basically performed in case of hilar type IHCC or lymph node swelling in the hepatic hilum. Four patients with IHCC who underwent laparoscopic left hepatectomy (LHx) or left lateral segmentectomy (LLSx) were studied. All were male, and age ranged from 52 to 76 years. Those short- and long-term outcomes of those four patients (Lap group) were compared with ten patients with IHCC who underwent open LHx or LLSx (Open group) in our institution.
Results: In Lap group, operative procedures consisted of LHx in one and LLSx in 3, and lymph node dissection was done in 2 patients. Median values of operative time, blood loss and hospital stay were 317 min., 246 ml, and 16.5 days, respectively. 5-year overall survival (OS) and disease-free survival rate (DFS) were 75 % and 38 %. Regarding the background variables, age in Lap group tended to be younger, and ICGR15 value in Lap group tended to be lower than those in Open group. Incidence of intrahepatic metastasis in Lap group tended to be higher than that in Open group. In respect to operative variables, rate of left hepatectomy in Lap group tended to be lower, however, no difference was observed in operative time, blood loss, and rate of lymph node dissection. Postoperative hospital stay in Lap group (median 16.5 days) tended to be shorter than that in Open group (34.5 days). Regarding the long-term outcome, 5-year OS and DFS in Lap group tended to be better than that in Open group, (OS: 75% vs. 30%, DFS: 38 % vs 20 %). In Lap group, one patient is alive without recurrence over 10 years after operation.
Conclusions: Lap-Hx could be justifiable in selected patients with IHCC from viewpoint of short-and long-term outcomes. 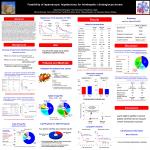