Fatigue Quantification in Laparoscopic Surgery: A Recurrence-analysis Based Approach

INTRODUCTION: Muscle fatigue is an important consideration for minimally invasive surgeons with expanding case volumes. However, few objective methods have been used to quantitatively evaluate surgeon muscle fatigue. Recurrence analysis of surface electromyography (sEMG) data assesses the level of determinism in muscle activation patterns (%DET), and has been used to evaluate fatigue in other disciplines. Highly deterministic patterns of muscle activation indicate well-practiced, fatigue-free actions. We hypothesized that the %DET of sEMG data collected from the upper extremity and upper back muscles of a surgeon during laparoscopic surgery performance would decrease over the duration of the surgical cases, indicating muscle fatigue.

METHODS: One right-hand dominant surgeon performed 11 laparoscopic surgical procedures while sEMG data was collected from the bilateral biceps, triceps, deltoid, and trapezius muscle groups. Recurrence analysis was performed on the sEMG data to determine %DET. We pooled %DET data from the first ten minutes (F10) and the last ten minutes (L10) of the operative procedures, and compared mean %DET from each muscle group using unpaired t-tests. Differences with a p-value < 0.05 were considered to be statistically significant.

RESULTS: The mean duration of analyzed operative cases was 52.0±21.0 minutes. Mean %DET data are shown in the table below. Significantly greater levels of %DET were noted in the right biceps and right deltoid muscles during the first ten minutes compared to the last ten minutes of surgical procedures.

Recurrence-based analysis of sEMG data collected from a surgeon performing laparoscopic procedures can be used to highlight differences in muscle fatigue during surgical cases. Our data suggest that muscle fatigue occurred primarily in the dominant upper extremity when the first and the last ten minutes of procedures were compared. Data from multiple surgeons are necessary to verify these findings. 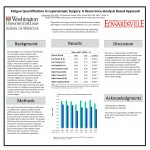