Fast access to the Common Bile Duct during Endoscopic Retrograde Cholangio-Pancreatography, our experience with a double wire technique.

RESULTS
Time from cannulation of PD until successful cannulation of CBD was as follow: The average time to cannulation post PD wire access was 120 seconds. All attempts of using the double wire were successful in gaining access into the CBD. There were no reported complications on this series. 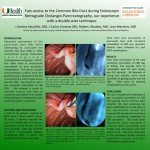