INTRODUCTION Electrosurgery is a modality that is widely used by surgeons to coagulate, dissect and ablate tissues. The use of electrosurgery devices has resulted in injuries, OR fires and even death. It has been established that even expert surgeons lack knowledge in the proper and safe usage of these devices. To address this knowledge gap, SAGES has established the FUSE (The Fundamental Use of Surgical Energy) program. Complementing the SAGES FUSE initiative, we have developed the Virtual Electrosurgery Skill Trainer (VEST©), which is designed to train subjects in the cognitive and motor skills necessary to safely operate electrosurgical devices and to understand the tissue effects, using 3D interactive and self-learning simulation. The objective of this study is to asses the face validity of the VEST© simulator.

METHODS AND PROCEDURES Sixty three subjects were recruited at the Learning Center of the 2014 SAGES annual meeting. All subjects completed the monopolar electrosurgery module on the VEST© simulator, which defines the electrical waveforms used in electrosurgery and describes the effects of different power settings on the tissue. At the end of the study, subjects filled in a 5-point Likert scale questions that assessed the face validity.

Results: The subjects response were grouped into two groups, FUSE experience (n = 15) and no FUSE experience (n = 48). The median scores for both the groups responses for all the questions were 4 or higher with questions on effectiveness of VEST© in aiding learning electrosurgery fundamentals was rated at 5. Subjects also rated with high confidence (median score of 5) on using the simulator in their skills lab and also recommend it to their peers. Mann-Whitney U test on the responses between the two groups showed no significant difference (p > 0.05) indicating a general agreement. 46 % of the respondents preferred VEST compared to 52 % who preferred animal model and 2 % preferred both for training in electrosurgery. 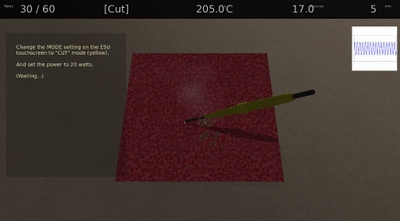 CONCLUSION This study demonstrated the face validity of the VEST © simulator. High scores showed that the simulator was realistic in reproducing the tissue effects and the features were adequate enough to provide high realism. The self-learning instructional material was also found to be very useful in learning the fundamentals of electrosurgery.