Objective of the technology or device
In SAGES 2009, we presented a novel surgical system named Water-Filled Laparo-Endoscopic Surgery (WaFLES) that replaced carbon dioxide gas into isotonic water (J Laparoendosc Adv Surg Tech A, 22: 70-75, 2012). The critical point of the system is to maintain clear vision by creating laminar and continuous flow of irrigant in the abdominal cavity avoiding disperse of blood by turbulence or jet flow even in the situation of severe hemorrhage. For this purpose, we had developed irrigation system via the extraperitoneal cisterna, and tested its advantages in carrying out single incision laparoscopic surgery (SILS) by comparing WaFLES with conventional laparoscopic trocars in some situation including severe bleeding.

Description of the technology and its application
Cisternae, made from silicon, and irrigation-recirculation system were prepared. The diameter of the cup-shaped cisterna was 145 mm and 110 mm for the top and bottom, respectively, with a 30 mm sized working channel in the bottom. The height was set around 80 mm. Three SPF pigs, weighed about 30 kg, were carried liver incision and dissection of the urinary bladder by WaFLES with conventional laparoscopic trocars (please see previous report) in two, and dissection of the urinary bladder by SILS using the cisterna in one under general anesthesia with approval of local ethic committee concerning animal experiment. In SILS combined with WaFLES (SILS-WaFLES), 3 cm sized incision was made in the upper or the lower abdominal cavity. The cisterna was set on the incision and irrigant (saline) was poured via the cisterna, which cancelled turbulent flow and air bubbles. A suction catheter was inserted to the bottom of the abdominal cavity via the working channel, creating laminar flow in the operating field. In case of interruption of laparoscopic view was occurred by floating organs, some net was used to exclude them from operating field. Bipolar electrode and electrical sealing device were used against hemorrhage.

Preliminary Results
Both types of surgery could be done, however, interruption of laparoscopic view was frequent in WaFLES with conventional trocar by blood and floating organs. In contrast, SILS-WaFLES with cisterna avoided cloudy vision by washing away blood from the surgical field even in the situation of bleeding from common iliac artery. The irrigating speed ranged between 500 ml/min. and 2,500 ml/min. Since irrigant connects cisterna and abdominal cavity, extraction of organs interrupting surgical field could be done setting the organs in nearly physiological condition.

Conclusions/Future directions
Proposed extraperitoneal cisterna system for SILS-WaFLES revealed to be tough for hemorrhage. In the next step, confirmation of its safety is essential to advance into clinical practice. 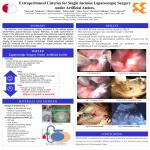