Background: While working to optimize outcomes, the impact of case timing and operative efficiency warrants investigation. Our goal was to determine if there is increased morbidity and mortality for elective colorectal procedures ending after 7pm. Our hypothesis was that elective cases that end after 7pm are associated with longer operative times, longer lengths of stay(LOS), and higher postoperative complications and readmission rates that comparable earlier cases.

Methods: ACS NSQIP was queried for elective inpatient colorectal resections from 1/1/15-12/31/15. Procedures were stratified into those completed before 7pm(standard) and after 7pm(late). Univariate analysis was performed to identify differences in perioperative and outcome variables between the standard and late groups. Groups were evaluated on demographic variables to validate comparability. The main outcome measures were the expected versus actual complication rates, operative time, LOS, and readmission rate across groups.

Conclusions: Elective colorectal procedures completed after 7pm have higher than expected complication rates. Late cases were associated with longer operative times and higher readmission rates compared to a similar cohort finishing before 7pm. As late case completion time appears to have a negative, preventable impact on patient safety and quality, efforts for more efficient workflow and scheduling are warranted. This administrative view demonstrates attention is needed at the institutional level to drill down on root causes on this matter. 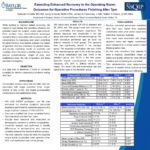