INTRODUCTION – Exploratory laparoscopy for evaluating stable trauma patients with both blunt and penetrating abdominal injuries has seen increased usage in recent years, yet still remains a controversial modality within the trauma community. We hypothesized that the use of laparoscopy for trauma at our Level I Trauma Center would lead to fewer laparotomies being performed, and that the patients treated using laparoscopy would have a shorter hospital stay when compared to patients treated with laparotomy.

METHODS AND PROCEDURES – We performed a retrospective review of all patients with documented blunt or penetrating trauma who were treated at the University of New Mexico Hospital (UNMH) from January 1, 2012 to December 31, 2013. Mechanism of trauma, Injury severity score (ISS), type of operative intervention, length of hospital stay, length of ICU stay, complications, readmissions, and mortality were examined.

RESULTS – From 2012 to 2013 a total of 276 trauma patients underwent surgical abdominal exploration, this group consisted of 227 men (82.2%) and 49 (17.8%) women. Median age was 35 years (IQR 24-44). Median injury severity score (ISS) was 13 (5-22). Of this cohort, 259 (93.8%) underwent exploratory laparotomy, and 29 (10.5%) underwent exploratory laparoscopy. Twelve patients (4.3%) had their laparoscopies converted to a laparotomy. During this two-year period, the median ISS increased from 10 to 14 (p-value 0.325), while there was a 7.9% decrease in laparotomy and a 7.7% increase in laparoscopy (p-value 0.034). When the total laparoscopy and laparotomy groups were compared with regard to hospital and ICU length of stay, the laparoscopy group had a significantly shorter median hospital length of stay (6 versus 8 days, p-value 0.0004), and a shorter median ICU length of stay (0 versus 2 days, p-value 0.0005). There were no missed injuries in the laparoscopy group. The complications of each group were equivalent. When comparing the subgroup negative laparoscopy to negative laparotomy, there was a one-day difference in median hospital length of stay (4 versus 5 days, p-value 0.08) however this was not statistically significant.

CONCLUSION – At UNMH, with the increased use of exploratory laparoscopy for the diagnosis and treatment of blunt and penetrating trauma, there was a concurrent decrease in the number of laparotomies performed, which was statistically significant. Benefits of exploratory laparoscopy included a shorter hospital and ICU length of stay, without an increased complication rate. No injuries were missed using laparoscopy as the initial modality. This data supports the use of laparoscopy in the treatment of stable trauma patients and that this may lead to a decrease in the number of laparotomies performed. 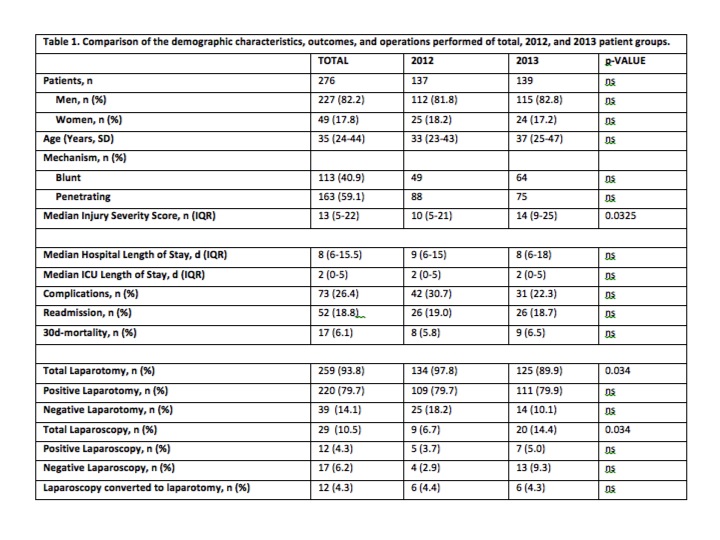 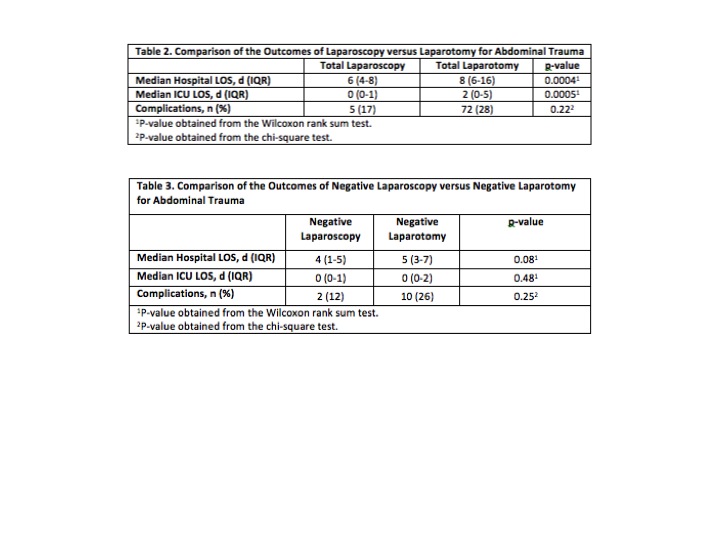