Methods: A retrospective clinical study was performed from January 2009 to December 2012. A total of 37 patients underwent laparoscopic CBDE with T-tube drainage and laparoscopic cholecystectomy (LC) for CBDS with nonsevere acute cholangitis and gallbladder stones. Patients with severe cardiopulmonary co-morbidities were excluded. During laparoscopic CBDE, the relationship of the cystic duct to the CBD and common hepatic duct was clearly identified. Choledochoscopy and stones retrieved weren’t necessity in order to shorten a period of operation time and to lower danger of the surgical procedure during laparoscopic CBDE. A drain was left at foramen of Winslow. Postoperative cholangiograms and/or choledochoscopy were accomplished in all the patients before T-tube removed, and retained stones was removed.

Results: 37 laparoscopic CBDE and LC were performed successfully. Duration of the procedure was 105.54±6.30 min. The diameter of common bile duct was 12.86±0.58 mm. There were solitary or multipled CBDS, acute or chronic cholecystitis was 14 (37.8%) and 23 (62.2%), 9 (24.32%) and 28 (75.68%) respectively. Postoperative hospital stay and whole hospital stay was 11.27±0.82 day and 16.41±1.03 day respectively. Control of septic symptoms and improvement of laboratory data were postoperatively achieved in all patients. There was no conversion to open common bile duct exploration, no major bile duct injuries and no mortality in this study. Overall, 4 cases with biliary leak and retained stones were discovered respectively. The biliary leak was postoperatively cured by conservative therapy with a drain left. The retained stone was retrieved postoperatively by choledochoscope.

Conclusion: Laparoscopic CBDE with T-tube drainage and LC for the treatment of CBDS with nonsevere acute cholangitis appears to be safe and effective. 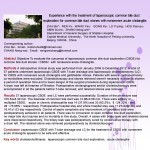