[Introduction] Since laparoscopic assisted distal gastrectomy (LADG) is less invasive, it has been extensively used and its safety has been being recognized. On the other hand, reduced port surgery has been considered as a next step in minimal access surgery.
We introduced Dual Incision Laparoscopy-Assisted Distal Gastrectomy (DI-LADG) using the technique of trans-umbilical single incision laparoscopic surgery.
[Surgical technique] A 2.5-cm longitudinal skin incision was made at the umbilicus and subcutaneous tissue was dissected. A 100-mm XCEL trocar 12 mm in diameter was inserted from the center of the area without fascia and an oblique-viewing endoscope 10 mm in diameter was used. A 65-mm Endo tip cannula (ETC) 6 mm in diameter was inserted from the right of the umbilicus to observe the peritoneal cavity and the location of the duodenum was confirmed. XCELs 12mm in diameter were inserted at both ends of a small incision (5 cm) that was planned to make just above the duodenum in the epigastrium, and an ETC was inserted at the left of the umbilicus under endoscopic observation via the port at the epigastrium. Devices were controlled intraperitoneally in LADG through these five ports. A surgeon, standing between the legs of the patient, was in charge of the port at the umbilicus, while an assistant, standing on the left of the patient, used ports at the epigastrium at the beginning of surgery. According to the site of lymphadenectomy, it was possible to adjust the line of lymphadenectomy during surgery by switching the positions of the surgeon and the assistant, which would shorten the operation time. When the duodenum was resected, a 30-mm oblique-viewing endoscope 5.5 mm in diameter was inserted from the ETC and a linear stapler was inserted from the XCEL trocar at the umbilicus. After completion of the intraoperative maneuver for duodenal resection, gastric resection and gastrointestinal reconstruction were carried out through the 5-cm small incision that was made between the sites where two ports were created at the epigastrium. Taken together, dual incisions, consisted of a single incision at the umbilicus generally for single incision laparoscopic surgery and a transverse incision at the epigastrium, were made and the wound scar at the umbilicus was inconspicuous. No special access port or flexible forceps was required in this method and some pairs of conventional straight forceps were used. Therefore, the method was economical.
[Results] DI-LADG was performed in 12 cases. No additional port was required in any case and lymphadenectomy of D1 + lymph node number 7, 8a, and 9 (around the left gastric artery, common hepatic artery, and celiac artery) was possible. Compared with the conventional LADG, operation time was longer but there was no significant difference in the amount of bleeding and the number of resected lymph nodes.
[Conclusions] From the point of view of reduced port surgery, DI-LADG was considered an option for laparoscopic surgery. 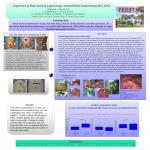