Evaluation of the R Port for Single Laparoscopic Port Procedures (SLaPP): A study of 20 cases

Introduction: Since the advent of Laparoscopic Surgery in the 1980’s, laparoscopic Cholecystectomy has rapidly become the gold standard for the treatment of symptomatic Cholelithiasis. In the last decade, surgeons have pushed the frontiers of technology to apply the laparoscopic technique to various abdominal surgeries. Standard laparoscopic techniques for cholecystectomy have consisted of the French and American techniques, with the use of four ports in both techniques. Traditionally laparoscopic ports work on the concept of one instrument per port and this has necessitated the use of four ports and four incisions for the completion of the procedure. Innovative surgeons have tried reducing the ports and have reported cholecystectomies using three and in some cases even two ports. There has been no reported case of transabdominal single port cholecystectomy using standard laparoscopic equipment and their modifications. The development of the R port of Advanced Surgical Concepts has made single port surgery possible.
Methods: The R port is an innovative port that allows the ingress of three 5 mm instruments at any given time. We report a initial series of 20 consenting patients in whom Laparoscopic surgeries were done between March to August 2007..The initial difficulties faced were crisscrossing of the instruments (chopsticks effect), clashing of the tangential light cable and the inability to insert a 10 mm clip applier. The instruments were modified to overcome the difficulties faced in our initial cases, to make the surgery feasible and reproducible. There were 10 cholecystectomies, 5 Appendectomies, 2 Hernias, 2 orchidopexies and 2 nephrectomies. The operative time ranged from 20 min to 240 min., with an average of 90 min. Only one patient required an additional 5 mm port for the completion of the cholecystectomy. Two patients needed a needle insertion in the Right hypochondrium to retract the gall bladder. In others the cholecystectomy and all the appendectomies and orchidopexies were finished through only a single umbilical port and no other instrumentation was used. Additional 5 mm ports were used for the CBD exploration. Both the hernias and one nephrectomy needed an additional 5 mm port. All patients of cholecystectomy and appendectomy were discharged within 24 hours and the CBD exploration patients and nephrectomies and orchidopexies were kept for 48 hours.
Conclusions: Single port laparoscopic surgery is feasible for cholecystectomy and appendectomy. Orchidopexy and nephrectomy may be possible in suitable cases. Hernia (TEP) was not possible with available instrumentation. 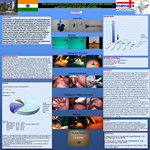