Materials and Methods: A total of 29 patients who underwent laparoscopic colectomy with IA at Tokyo Medical University Hospital between January 2014 and April 2016 were included in the study. In each patient, after perfoming of the IA, the abdominal cavity surrounding the anastomosis was washed with 300 mL of saline, and 10 mL of the saline for culture analysis. In addition, post-operative body temperatures (BT) and C-reactive protein (CRP) levels of the study subjects were compared with IA and 35 patients who underwent laparoscopic colectomy with extracorporeal anastomosis (EA) during the same period.

Conclusion: Intra-abdominal infection may occur owing to the leakage of digestive bacteria during laparoscopic colectomy with IA. We hence conclude that methods should be designed to prevent infection during the IA procedure. 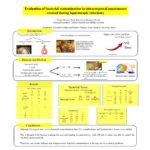