Evaluation of a Wireless Hands-Free Surgical Pointer for Surgical Instruction

Training for Minimally Invasive Surgery (MIS) requires the surgical resident to operate under the guidance and supervision of a surgical consultant. Current instruction methods make it difficult to point to a monitor, as both hands of the instructor are occupied. The Wireless Hands-Free Surgical Pointer (WHaSP) has been developed to assist with surgical instruction during MIS. This head-mounted device is worn by the surgeon, thereby freeing up the hands to operate.

Located within a lightweight headband device is specialized technology that uses a combination of multiple motion-tracking technologies. This allows an instructor to precisely point to anatomic features during MIS in a hands-free manner. In addition, the WHaSP technology allows the pointer-augmented image to appear on multiple monitors without any time delay or degradation of the original endoscopic video signal. Inside the head unit is a marker and inertial sensors (accelerometers and a gyroscope) that track head motion as the user moves his/her head. The motion of the marker is tracked by a camera, while the inertial sensors provide acceleration and velocity information. The novelty of this patented system lies in the fact that both signals are used to complement each other when controlling the pointer motion. Overall system robustness increases by using these two sensor modalities. This headband device technology uses wireless, OR-safe, Bluetooth technology to transmit data from the inertial sensors, thereby eliminating the need for restrictive wires or cables.

A study has been performed to evaluate the performance of the WHaSP within the operating room.  The objective of the study was to evaluate the efficiency and the value of the WHaSP as an instruction tool as compared with conventional instruction methods during MIS. A total of 101 laparoscopic cholecystectomy procedures were randomized with respect to using or not using the WHaSP. Audio and video from the surgeries were recorded and periods in which instruction was taking place were extracted and analyzed. Instructing surgeons provided feedback through a post-operative questionnaire that used a five-level Likert scale. These results were analyzed using a two-sided Pearson chi-square test.

A fully functional prototype has been developed and has undergone evaluation. Future work will further reduce the size and power consumption of the components used in the head mounted device. Many surgeons have asked when they can expect to see the WHaSP in their OR. Our goal is to make this happen in the very near future. 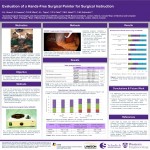