Background: Although the use of defunctioning ileostomy is a common practice in colorectal surgery, stoma obstruction is sometimes encountered by surgeons, especially after laparoscopic surgery.

Purpose: The aim of this study was to assess the risk of stoma obstruction.

1) We retrospectively reviewed all patients who underwent colorectal resection and defunctioning ileostomy between April 2008 and March 2014 in Kagawa University Hospital. A round incision 20 mm in diameter was made in all patients at a preoperatively marked site on the skin.The factors affecting stoma obstruction were analyzed.

2) We prospectively analyzed the clinical data of patients who underwent skin extension by laparoscopic pneumoperitoneum between April 2016 and September 2016 in Sumitomo Besshi Hospital. A circular mark was made on the abdomen using a metallic pipe 19 mm in diameterwith the pneumoperitoneum at 10 mmHg according to the principles of stoma site marking. After degassing, the diameter of the marking was measured. 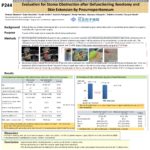