INTRODUCTION
There is significant interest in further reducing the trauma associated with surgical procedures. In late years single port laparoscopic surgery (SPLS) is rapidly spreading by the improved cosmesis and less invasiveness. SPLS came to be gradually performed for colorectal cancer, and it has been reported that SPLS is both safe and feasible in colorectal cancer, and that it has equivalent or better short-term outcomes than conventional laparoscopic surgery (CLS). However, few comparative studies for SPLS and CLS have been reported on less invasiveness including postoperative pain in colorectal cancer.

METHODS AND PROCEDURES
We retrospectively compared SPLS group (n=11) with CLS group (n=11) for postoperative pain to evaluate less invasiveness of SPLS for colorectal cancer. Patients were specifically matched in regard to patient’s age, gender, BMI, tumor location, and tumor size. Postoperative pain was evaluated using a visual analogue scale (VAS) and postoperative frequency of analgesics as primary outcome measures. Both VAS at rest and on exercise were measured each on 1, 2, 3, 4, 7th day after surgery. Secondary outcome measures were time duration before first flatus, blood test results (C-reactive protein and WBC ) on the day after surgery, and postoperative early complications . 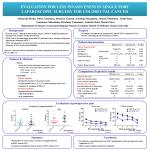