Evaluating the Collaborative Approach to the Implementation of Robotic Kidney Surgery

Since the initial adoption by urologist for performing prostatectomies, robotic surgery has become more widespread with almost all surgical specialties now performing robotic procedures. Robotic kidney surgery adoption has been less widespread possibly due to the difficulty of this procedure and potentially the need for surgeon assistance in the operating room. The purpose of this project was to evaluate our experience with robotic nephrectomies performed by a urologist/general surgery team and to evaluate the learning curve associated with this procedure.

Fifty robotic nephrectomies were reviewed with an average age of 61 years, 58% male, and 72% Caucasian. Procedures performed included robotic radical nephrectomy in 22 (44%), partial nephrectomy in 16 (32%), and nephroureterectomy in 12 (24%). Conversion rate to open surgery was 16%. Average OR time was 149 minutes and average length of postoperative stay was 3.6 days. Morbidity rate was 16% with no perioperatively mortalities. There were no significant differences in outcomes based on type of procedure (p>0.05) except that partial nephrectomies were significantly younger (p=0.04) and nephreoureterectomies took significantly longer to perform (p=0.004) compared to partial and radical nephrectomies. There was no correlation between OR time, conversion rate, or complication rate related to number of procedures performed (p>0.05).

Robotic nephrectomies can be safely performed by a General Surgeon/Urology team. As experience grows, more complex cases including partial nephrectomies and nephroureterectomies can be safely performed with the robot. We were unable to document a learning curve for these procedures and may be related to the collaborative approach. Further study is needed to evaluate the role of robotic surgery in kidney surgery as well as the role of a general surgeon in these cases. 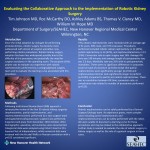