Esophago-Bronchial fistula in child treated with a combined esophagoscopy and fluoroscopy guided coil and glue embolization.

Introduction:
Esophago-bronchial fistula (EBF) after esophageal atresia (EA) with trachea esophageal fistula (TEF) repair is extremely rare. There are no cases reported in literature. It is difficult to treat these fistulae with other minimally invasive techniques described for repair of recurrent TEF.

A 2 year old boy who had undergone EA with TEF repair at an outside hospital at birth presented with choking and coughing after feeds and recurrent pneumonia. Esophagogram revealed EBF between the middle third of esophagus and a subsegmental bronchus of the posterior segment of right upper lobe. Rigid bronchoscopy did not reveal a TEF. The child was made NPO and a Laparo-enodoscopic Gastrostomy tube (LEGT) was placed for feeding.
We describe a novel minimally invasive technique for the treatment of this extremely rare condition.

Material and Methods:
The case records of the child were retrospectively reviewed.

Technique:
First attempt:
A Pediatric esophagoscope was advanced into the middle third of the esophagus and the EBF was demonstrated. A 3F JB-1 catheter was advanced through the oral cavity under esophagoscopic and fluoroscopic guidance into the esophagus and the fistula was cannulated under direct vision using endoscopic guidance. The fistula was demonstrated and embolized using 0.5ml 50% nBCA .

Second attempt:
After cannulation of the fistula as above, a 2mm x 2cm micro-Nester coil was deployed within the fistula followed by injection of nBCA opacified with tantalum powder and a drop of Ethiodol into the residual channel.

Results:
The first embolization with glue alone failed with recanalization at 2 months. Repeat procedure was performed with coil and glue. At 8 months follow up after combined coil and glue approach, the child is doing well with no further episodes of choking or coughing at feeds and complete occlusion on esophagogram. He is on full oral diet and the gastrostomy has been removed.

Conclusion:
Esophagoscopy and fluoroscopy guided combined coil and glue embolization technique is a safe and effective treatment option in the management of difficult EBF in infants and children and may avoid major thoracotomy for the same. 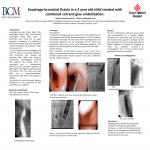