Introduction: Esophageal anastomoses in major upper gastrointestinal surgery can be technically demanding, especially in patients with large proximal tumours, and in those undergoing a minimally invasive approach. The OrvilTM circular stapler is unique in its ability to be inserted via the mouth, and potentially offers an easier method of ensuring adequate margins. Little is reported in the literature regarding its outcomes and complication rates.

Methods: All patients undergoing esophageal or gastric resection between September 2008 and April 2013 were identified from a prospectively maintained surgical database. Primary outcomes were anastomotic leak and postoperative stricture. Pitfalls were also identified and recorded.

Results: We identified 67 patients in which the OrvilTM circular stapler was used to create an anastomosis. Forty had had an Ivor-Lewis esophagectomy, and 27 had had a total gastrectomy. The median patient age was 66 years, and median follow-up was 13.6 months. Median proximal clearance was 44mm. Neoadjuvant treatment was successfully completed in 35 patients (52%). One patient (1.9%) had an anastomotic leak requiring surgical correction. During the follow-up period, 7 patients (10.5%) developed a postoperative stricture ; all successfully treated by endoscopic dilatation. Two patients (3%) developed wound infections requiring medical intervention (grade II). There were no in-hospital deaths in this patient cohort.

Conclusions: The OrvilTM circular stapler is relatively easy to use and reduces some of the technical difficulty when performing esophageal anastomoses. Anastomotic leak rates and stricture formation compare favourably with historical outcomes using conventional anastomotic methods. 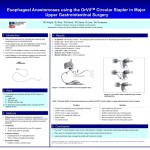