Background. Neoadjuvant chemo- and chemoradiotherapy (CTX and CRT) are considered the gold standard in the treatment of locally advanced adenocarcinomas of the distal esophagus (EAC) prior to surgical resection. The degree of pathological response to neoadjuvant treatment is thought to be a major prognostic factor for survival after surgical resection, however limited data exists.

Methods. A retrospective chart review was performed of all patients that underwent neoadjuvant therapy and esophagectomy for stage III EAC between 01/1999 and 08/2013. Demographic, clinical, histopathological and survival data were collected and analyzed. Patients were classified into complete (no residual tumor; pCR) versus incomplete responders (residual tumor; pIR) to neoadjuvant CTX/CRT based on the findings in the esophagectomy specimen.

Figure: Survival of complete vs. incomplete responders to neoadjuvant therapy. 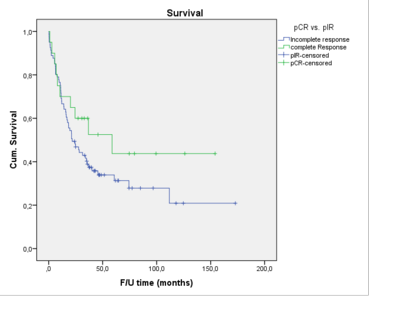