INTRODUCTION – Transgastric NOTES cholecystectomy is a technically challenging procedure to perform with a flexible platform. Ergonomic factors of utilising a flexible platform in an unconstrained workspace such as the peritoneal cavity contribute significantly to the complexity of the task. The aim of this study was to objectively determine the ergonomically optimal gastrotomy site in order to surgically access Calot’s triangle. The hypothesis tested predicts that the more proximal from the pylorus the enterotomy is made, the more difficult and less ergonomic the task of reaching Calot’s triangle would become.

METHODS AND PROCEDURES – The study was conducted on the validated ELITE NOTES simulator using a conventional flexible gastroscope1. Four gastrotomies (A-D) were pre-made along an arc from the proximal body to the antrum along the anterior (ventral) surface of the stomach, to avoid the course of the main gastroepiploic arterial anastomoses and the left gastric artery (Fig.1). 14 surgical residents (years qualified: 3-10years) with prior experience of both gastroscopy and laparoscopic cholecystectomy were randomised to perform the task three times through each of the four gastrotomies (12 procedures in total each). During the task, the gastroscope tip was tracked via an Aurora® 5-DOF electromagnetic tracker. The surgeons’ wrist movements were tracked with an OPTOTRAK Certus® optical tracking system2. The time taken to touch the cystic artery within Calot’s triangle and then touch the fundus of the gallbladder was a primary outcome measure (with 16minutes maximum task-time allowed). Following the tasks the surgeons were asked to complete the NASA-TLX questionnaire to obtain results on cognitive workload.

CONCLUSION – In this laboratory based simulator model, placing the gastrotomy in the distal antrum of the stomach provided the easiest access to Calot’s triangle for transgastric NOTES with optimal ergonomics for the surgeon. This conclusion is supported by the shorter task-time, shorter gastroscope tip pathlength, smoother scores for wrist movement and lower scores on the NASA-TLX for the gastrotomy placed most distal. 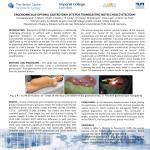