Ergonomic assessment of the French and American position for laparoscopic cholecystectomy

Aims: The cholecystectomy was one of the first surgical procedures to be performed with laparoscopy in the 1980s. Nowadays, there are generally two operation setups to perform a laparoscopic cholecystectomy: the French and the American position. In the French position the patient lies in the lithotomy position, while in the American position the patient lies supine with the left arm in abduction. In order to find an ergonomic difference between the two operation setups the movements in the vertebral column of the surgeon were analyzed in this crossover study.

Conclusion: In a modern dedicated minimally invasive surgery suite, there were no significant differences in body posture of the neck and trunk and orientation of the head between the French and American position. 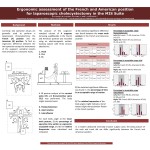