Technology and Methods: Six surgeons with different experience levels in laparoscopy, four experienced surgeons (>100 laparoscopic procedures) and two novice surgeons (<10 laparoscopic procedures), took part in this study. They were asked to perform different laparoscopic suturing tasks: (1) to pass the suture needle through a set of four pair of entry and exit dots in both vertical and horizontal plane marked on a training plate; (2) to carry out three sutures on an organic tissue; and (3) to perform an ureterovesical anastomosis on an ex vivo porcine model. For each task participants were randomly assigned to two groups, starting the task with a traditional laparoscopic needle holder (Group L) or the robotic laparoscopic instrument (Group R). This robotic instrument (DEXTM, Dextérité Surgical, France) is a motor-driven device that provides a flexible tip and unlimited rotation with seven degrees of freedom, ergonomic handle, and haptic feedback.

In order to assess their training learning curve participants repeated the exercises five times in a period of one month. During the first (T1) and the last (T5) repetition different assessment metrics were obtained such as the accuracy value of the correct pass of the needle for the task 1, the quality of the suturing performance for the task 2, and the completion times as well as the analysis of the shoulder adduction-abduction and shoulder and elbow flexion-extension during the task 3. For the assessment of the suturing performance, score through a validated suturing specific-checklist was assessed by two blinded experienced surgeons. For analysis of the position of the surgeon's upper limbs a motion capture system based on eight cameras with infrared vision and retroreflective markers placed on the surgeon's body was used (Figure 1). 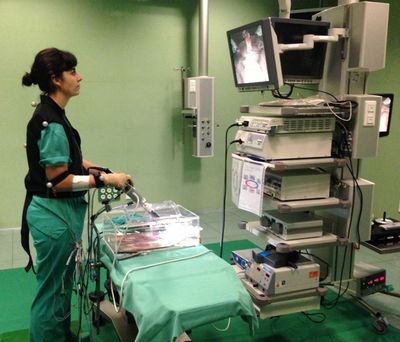 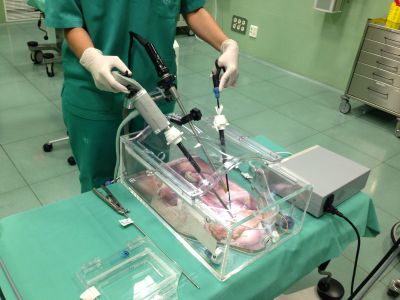 Conclusions: Results show a positive evolution regarding the learning curve of the new surgical instrument at both performance and ergonomic level. At the last repetition results are similar for both instruments for all the assessment metrics. We believe that these results can be improved with a longer training period with this novel instrument.