INTRODUCTION: The gold standard for treating acute/chronic cholecystitis is by laparoscopic cholecystectomy with or without intraoperative cholangiogram(IOC). Currently, no one method can be said to be the gold standard for the treatment of obstructing complications of calculous biliary disease including biliary pancreatitis, cholangitis, or (a)symptomatic choledocholithiasis. Since 1997, one of the authors of this paper has been performing the One Step procedure for some selected cases of obstructing biliary disease. For the first time, a randomized retrospective comparison is being made of the One Step and Two Step procedure which demonstrates both the efficacy and a clear benefit of the One Step procedure.
METHODS: One Step defined: In the One Step procedure a laparoscopic cholecystectomy is first performed and an IOC is obtained. If the cholangiogram is positive for common bile duct stones or if for technical reasons a cholangiogram is not possible, an INOPERC(Intraoperative ERCP) is obtained if indications for ERCP were present at admission. Depending on the ERCP findings, a sphincterotomy, balloon exploration of the common bile duct with stone extraction and/or bile duct stenting is performed. Two Step defined: In the Two Step procedure, preoperative ERCP is usually completed by the Gastroenterology(GI) service after consultation by the admitting team. Depending on the ERCP findings, therapeutic procedures are performed by the GI team as indicated. Laparoscopic cholecystectomy is then scheduled at a later time usually within 24-48 hours of completion of the pre-operative ERCP. Laparoscopic cholecystectomy is usually performed without IOC. Ten One Step and ten Two Step procedures were randomly selected. Total operative time was compared along with total hospital charges. The data was collected from medical records retrospectively. Operative time, hospital days, and hospital charges were then tallied and individually and collectively compared using a Mann-Whitney statistical analysis.
RESULTS:

CONCLUSIONS: Obstructing calculous biliary disease can effectively be treated by surgeons in a One Step fashion. By limiting the number of operative procedures and hospital days, patients can be safely and more efficiently treated using this method. We found a significant difference in total hospital charges. Although there was no significant difference in total operative time or hospital days, there was a trend toward a decrease in both with the One Step procedure. There were no complications in either of the two study groups and operative times were similar.  In addition, a large, randomized prospective study is currently underway to further compare these two standard methods for treating obstructing calculous biliary disease. 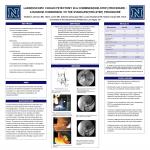