Endoscopy in the Management of Cervical Spine Plating-related Esophageal Injury

Report of first case: A 52 year old man was referred for progressive dysphagia, involuntary 30 lb. weight loss, chronic cough and episodic upper chest pain of one year’s duration. He described food sticking at the lower cervical level. He had anterior cervical discectomy with plating six years previously. He was counseled for esophagogastroduodenoscopy (EGD).
Report of second case: A 57 year old man underwent revisional anterior cervical plating. He had worsening neck pain and turbid drainage from a cervical drain on the first postoperative day. He became febrile to 101.8F. Barium swallow was negative. His surgeon requested consultation for EGD.
Techniques: EGD in the first case demonstrated gross erosion of the cervical plate into the esophageal lumen. A PEG tube was placed and the patient kept NPO until surgery. The cervical plate and screws were removed. A complex esophageal injury was identified and repaired with Alloderm soft tissue matrix.
The patient was kept NPO and fed via the PEG tube for four weeks. EGD was performed in the second patient and identified a small esophageal injury on the right, approximately 3 cm distal to the cricopharyngeus muscle. He was made NPO and central venous access established for TPN.
Results: Repeat EGD in the first patient demonstrated healing of the injury over the Alloderm tissue matrix. The PEG tube was removed and an oral diet started. His symptoms resolved and he has returned to his premorbid weight. The second patient was kept on antibiotics and TPN for a week as his drainage decreased. He remained afebrile and the drain was removed 10 days after EGD. He remained well at 4 months of follow up.
Discussion: EGD and related techniques are critical in the diagnosis, therapy and follow up of suspected and proven esophageal injuries of any etiology. These cases support the use of EGD in such clinical situations. The second case exemplifies the superior sensitivity of EGD versus radiologic methods for detection of anatomically small, yet clinically significant injuries. 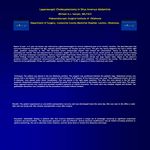