BACKGROUND: Endoscopic thyroidectomy has been accepted as an option for a benign small thyroid lesion. There are two endoscopic approaches in our center. First is trans-axillary technique for unilateral lesion and trans-chest wall technique for bilateral lesions. The procedure begins with 1) working space creation and follows with 2) tissue dissection. Our technique to create a working space has been utilizing the Chula thyroid space creator. In this study we retrospectively reviewed patients who underwent endoscopic thyroidectomy.

RESULTS: From January 2008 to September 2012, 106 patients underwent endoscopic thyroidectomy in Chula Minimally Invasive Surgery Center, Department of Surgery, Faculty of Medicine, Chulalongkorn University. Sixty five of 106 were endoscopic thyroidectomy. Sixty five were transaxillary approach, all of them were for lobectomy. Thirty six cases were trans-chest approach, of these, 24 cases were subtotal thyroidectomy. Five cases were robotic thyroidectomy (TA 4, TC 1). The space was successfully created without any major complication. There were seven conversion due to the size of masses that limited working space. 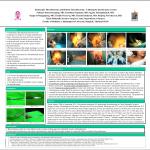