Methods
All the patients undergoing oesophago-gastric anastomoses over the a 3 year period following curative resection for oesophageal cancer are followed up prospectively; both the hand sewn group and stapler group are compared in terms of symptomatic anastomotic stricture requiring dilatation/ stenting and anastomotic leak.

Results
A total of 77 patients underwent oesophago-gastric anastomoses during this period (Hand sewn anastomosis in 37; Circular EEA anastomosis in 40). In each group the number of anastomotic strictures requiring dilatations were 3:5 (p >0.05); stenting procedures were 1:2 (p >0.05) and there were no anastomotic leakages in any group.

Conclusion
There are no significant differences in the anastomotic stricture rate and anastomotic leakage between the hand-sewn group and the stapler group following TSO. Meticulous technique contributes to the success of anastomosis more than choice of technique. 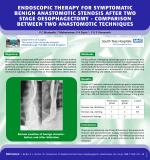