Methods
A retrospective review of all patients with metastatic colorectal cancers who underwent either endoscopic stenting or emergency surgery for acute intestinal obstruction was performed.

Patients who failed stenting (4/6) had worse grades of complications than those who were successfully stented (1/12) (p: 0.022). This trend was also observed when compared to those patients who were operated immediately (4/13), although the difference was not statistically significant. In addition, the median length of stay (5, range, 3 – 12, days) was shorter in the successful stented group (p: 0.005) compared to the operated group (11, range, 5- 40, days).

Twenty-eight patients were discharged well. Only 16 (57.1%) underwent subsequent chemotherapy. The group that was successful stented had earlier commencement of chemotherapy (median: 3, range: 1-6, weeks) than the operated group (median: 10, range: 2- 48 weeks). There was no difference in the overall survival between the groups.

Two major stent-related complications were encountered 4 and 5 months after the stent was inserted. Perforation at the tumour site was seen in both patients and required immediate surgery.

Conclusion
Self expanding metallic stents for intestinal obstruction in patients with metastatic colorectal cancers are associated with superior outcomes and earlier commencement of subsequent chemotherapy. However, patients who fail endoscopic stenting may encounter significant complications. 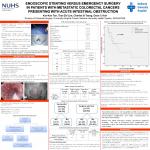