Technique: This was a prospective study using a single fresh frozen cadaver and a series of 5 patients prior to laparoscopic complex ventral hernia repair. On each side of the abdomen, a 20mm transverse incision was made midway between the tip of the tenth rib to a point just medial to the anterior superior iliac spine. The external oblique fascia was exposed and incised along the lines of its fibres, and a space developed between the external and internal oblique muscles. Under direct vision using a 3mm endoscope, the MicroAire® system was introduced, the retractable blade triggered, and the external oblique muscle and fascia was incised as the blade is withdrawn. This process is repeated cranially and caudally, to achieve release along the entire length of the EO. This procedure has been performed in a series of 5 patients with massive ventral hernia, under general anaesthetic, immediately prior to elective laparoscopic hernia repair. Measurements were taken using real-time ultrasound before, during and after pneumoperitoneum, with subsequent follow-up imaging at 2, 3 and 4 weeks post-operatively.

Results: Endoscopic EO release achieved a maximum 37mm gain of myofascial advancement per side above the umbilicus, and a maximum of 26mm below the umbilicus (per side) on cadaveric studies. Similar gains were noted with the series of laparoscopic ventral hernia repair patients. To date, there have been no complications from the procedure.

Conclusion: Endoscopic single port external oblique release is simple and effective, and holds potential as an adjunct in the repair of large ventral hernia defects. It entails minimal disruption of tissue planes and vasculature and therefore maintains the integrity and functionality of the abdominal wall. Further quantification of potential advancement gains and morbidity from this technique are warranted. 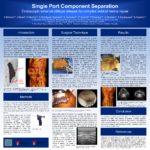