Objective of the technology or device: Fluorescence angiography is a technology that is available and has been utilized in a variety of open and robotic surgical settings including assessment of adequate tumor margin resection, viability of the blood supply in flaps created during reconstructive plastic surgery, and coronary artery bypass. The technology for NIR fluorescence angiography has now been developed for use in laparoscopic procedures.

Technology: Near Infra Red (NIR) fluorescence angiography using the PINPOINT® Endoscopic Fluorescence Imaging System. The system consists of a rigid endoscope, camera and light source optimized for both high definition (HD) white light and near infra red fluorescence images (NIRF). The NIRF images are acquired following administration of an intravenous bolus of indocyanine green (ICG), an agent confined to the vascular space that fluoresces in the NIR light. Perfusion is assessed by qualitative inspection of the NIRF images.

Clinical Impact: The system is being utilized to assess tissue perfusion for colorectal anastomosis:

1. Intra-corporeal, laparoscopic assessment of perfusion at the planned division of the proximal colon.

2. Endoluminal assessment of perfusion of the completed anastomosis and the adequacy of blood flow to both sides of the anastomosis. 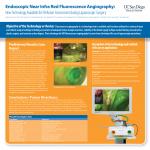