Introduction: Endoscopic stenting with fully or partially covered self-expandable metallic stents (FCSEMS) has become an effective and first line treatment for many esophageal and bariatric surgery re-lated perforations and leaks. The use of FCSEMS has not been used routinely for peptic ulcer or gastric ulcer related perforations, when traditional surgery may be contra-indicated. We describe a case of the use of a FCSEMS to treat a large perforated gastrojejunal ulcer in a 58 y/o male patient with a history of antrectomy and roux en Y reconstruction for recurrent ulcer disease as well as 9 prior upper abdominal laparotomies, 3 of which were for ulcer disease, and the remaining for recurrent hernia with mesh and jejunal fistula repair. This scenario obviously raised the concern for a frozen abdomen.

Results: Emergency CT scan confirmed free air and amount of contrast extravasation. The patient was septic on presentation and after aggressive resuscitation was brought to the OR and placed under GETA. Given our concern for a frozen abdomen, we performed gastroscopy with CO2 insufflation. The endoscopic exam confirmed the history of a past antrectomy with roux en Y reconstruction. A large 2.5 cm perforation was seen to the right of the gastrojejunostomy. A wire was placed into the jejunal roux limb and a Boston Scientific 23 x 125 FCSEMS was placed under fluoroscopic guidance. Given the large right-sided abdominal abscess and the patient’s tense abdominal distention from the endoscopic insufflation, we opened the far right lateral abdomen safely and performed abscess drainage and left a sump drain.

The patient improved rapidly with decreased tachycardia and abdominal distention. His ICU and hospital course were mostly unremarkable except for repeat endoscopy to reposition the stent with clips and to place a naso-duodenal feeding tube. Serial KUB’s were done to ensure no further stent migration. Stent removal was performed at 12 weeks post-op after complete healing of the ulcer was seen. Subsequent H.Pylori and gastrinoma workup was negative. The patient has been kept on long term PPI therapy and remains asymptomatic and well after one year.

Conclusion: FCSEM stent placement was safe, feasible and effective in this patient with a large perforated gastro-jejunal ulcer and a frozen abdomen. Further studies and methods of improved stent fixation are needed to determine if this approach is feasible for other typical peptic ulcer perforations. 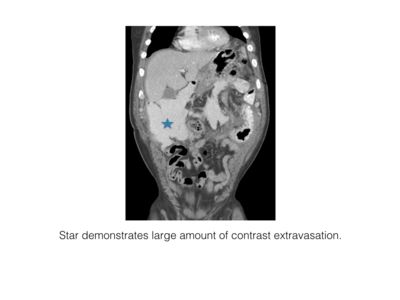 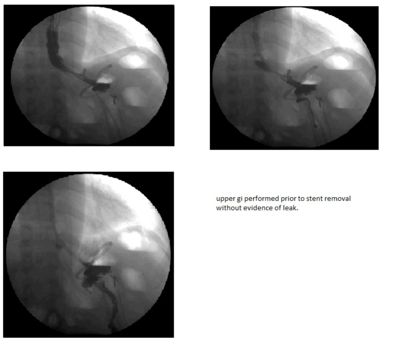