INTRODUCTION: Endoscopic entero-enteral bypass could change our approach to small bowel obstruction in patients with prohibitively high operative risk. Magnetic compression anastomoses have been well-vetted in animal studies, but remain infrequent in humans. Isolated cases of successful use in humans include treatment of biliary strictures and esophageal atresia.While endoscopic gastro-enteric magnetic anastomoses have been described, the associated multicenter cohort study was terminated due to serious adverse events. Since then, the technology has evolved and recently our own institution reported results of the first in-human trial of Magnetic Compression Anastomosis (Magnamosis), deployed through an open approach. Here we present the first case of endoscopic delivery of the Magnamosis device and the successful creation of an entero-enteral anastomosis for chronic small bowel obstruction in a patient with prohibitively high operative risk.

METHODS: The Magnamosis device has previously been approved by the Food and Drug Administration (FDA) for use in clinical trial. Our Institutional Review Board approved emergency compassionate endoscopic use of the device in this patient due to a non-resolving small bowel resection and prohibitively high operative risk.

CASE: This is a 59 year old man with advanced liver disease, chronic obstructive pulmonary disease, and history of emergent right colectomy with end ileostomy for cecal perforation. He presented with multiple acute on chronic episodes of small bowel obstruction with a stable transition point in the distal ileum, radiographically estimated at 15 centimeters proximal to the ileostomy. Endoscopic evaluation through the ileostomy revealed a traversable obstruction with proximally dilated small bowel. The magnets were delivered via endoscopic snare under fluoroscopic guidance and positioned in adjacent loops of bowel on either side of the obstruction (Image 1). By 7 days post-procedure, healthy villi were visible through the central portion of the mated magnetic rings (Image 2). By 10 days the magnetic rings were mobile and the anastomosis was widely patent allowing easy passage of the gastroscope (Image 3), and the patient’s symptoms were completely resolved. The rings passed through the ileostomy 11 days post-procedure. At 1 month follow up, the anastomosis was unchanged (Image 4).

CONCLUSION: This case demonstrates the benefit of an endoscopically created magnetic compression anastomosis in a patient with small bowel obstruction and high operative risk. Further studies are indicated to evaluate the use of this technique in similar patients or those with malignant obstruction. 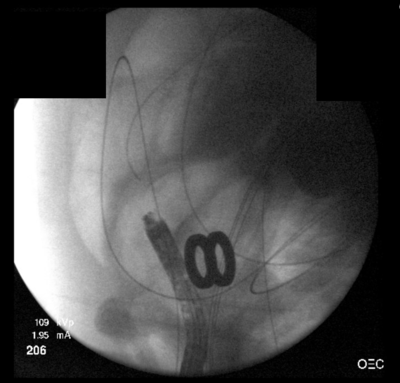 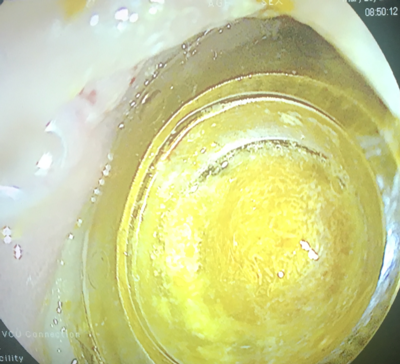 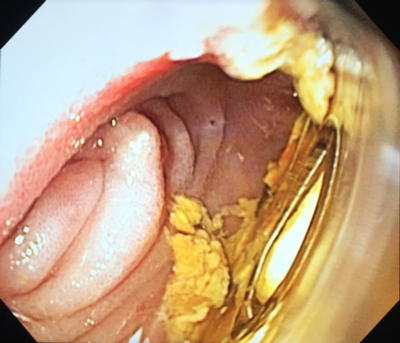 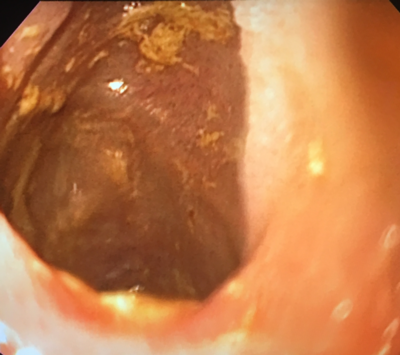