Endoscopic Fundoplication for the Management of Gastroesophageal Reflux: A Community Hospital Experience

Objective: Transoral Incisionless Fundoplication (TIF) continues to be evaluated as a potential alternative to both conventional surgical and medical options for certain patients with gastroesophageal reflux disease (GERD). Most studies and case series that have been published, however, have been conducted in academic tertiary care centers. We report our initial experience with this approach in a community hospital setting.

Methods: Over a three year period, 13 patients underwent the TIF procedure. 10 patients were males and 3 patients were females. The mean age of the patients was 51.3. All 13 procedures were performed by the same surgeon with one surgical assistant. Primary endpoints of the procedure included post operative remission of GERD symptoms (based on remission, ongoing or continued symptoms questionnaire) and need for post operative PPI use. Complications were classified as minor (bleeding requiring no intervention) or major (bleeding requiring intervention, perforation or intractable dysphagia). Pre-Operative workup included EGD for Hiatal Hernia size evaluation, barium esophagogram and gastric emptying studies. Only 6 underwent ph studies due to atypical symptoms.

Results: Mean procedure time was 86 minutes (range 50- 125 minutes). Mean hospital stay was 1.2 days. One patient was admitted with chest pain but sent home with a negative workup. There was one minor complication (patient with bleeding that formed from suture but required no intervention). There were no major complications. 11 patients had a mean follow up of 17 months with two patients lost to follow up. Of the 11 patients, all had follow up greater than 180 days. Of these 11 patients, all but 2 had complete remission or improvement of index symptoms. The two patients who had ongoing symptoms subsequently underwent Nissen fundoplication. One patient who had improvement of symptoms required repeat TIF due failure of the fundoplication at 6 months post index procedure. 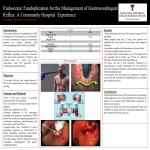