Background: Esophageal myotomy using submucosal endoscopy with mucosal safety flap (SEMF) has been proposed as a new treatment of achalasia. In this technique, a partial-thickness myotomy (PTM) preserving the longitudinal outer esophageal muscular layer is advocated, which is different from the usual full-thickness myotomy (FTM) performed surgically. The aim of this study was to compare endoscopic FTM and PTM analyzing the outcomes of each method after a 4-week survival period. Materials and methods: Twenty-four pigs were randomly assigned into Group A (FTM, 12 animals) and Group B (PTM) to undergo endoscopic myotomy. Lower esophageal sphincter (LES) pressure was assessed using pull-through manometry. For statistical analysis we compared the average esophageal sphincter pressure values at baseline, after 2 weeks and after 4 weeks between groups A and B. The p value was set as <0.05 for significance. Results: Eighteen animals were included for statistical analysis. Mean (SD) LES pressures were similar between groups A and B (9 animals each) at baseline (group A = 23 (10.4)mmHg; group B = 20.7 (8.7)mmHg; p=0.79), after 2 weeks (group A = 19 (7.7)mmHg; group B = 21.8 (8.4)mmHg; p=0.79) and after 4 weeks (group A = 22.6 (10.2)mmHg; group B = 20.7 (9)mmHg; p=0.82). LES pressures were significantly reduced in three animals after 4 weeks: one animal (1%) in group A and 2 animals (2.5%) in group B. An extended myotomy (3 cm below the cardia) was achieved in 3 animals, and responsible for the significant drop in LES pressure seen in the two animals from group B. Conclusion: Esophageal myotomy using SEMF is a feasible yet challenging procedure in pigs. Full-thickness myotomy does not seem to be superior to partial-thickness myotomy as demonstrated by pull-through manometry. Endoscopic esophageal myotomy results are greatly influenced by obtaining adequate myotomy extension into the gastric cardia.
Keywords: Achalasia, Endoscopy, Minimal Access Surgical Procedures, Operative Therapy, Swine. 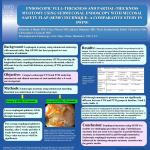