A 40-year-old previously healthy Native American female was transferred to our university center for treatment of a duodenal perforation following elective laparoscopic cholecystectomy (LC). Three days after LC, she underwent exploratory laparotomy and a Graham patch repair for a reported post-pyloric ulcer in the first portion of the duodenum. Secondary to hemodynamic instability and septic shock, the referring surgeons placed a temporary abdominal closure device and transferred the patient to our facility for a higher level of care. During exploratory laparotomy, an uncontained leak was found to originate from a 1.5cm duodenal defect, with no evidence of ulceration, in the area of the previous Graham patch. A large Malecot tube was introduced through the defect and secured with a purse-string suture. In subsequent abdominal explorations, despite placement of large abdominal drains and a duodenostomy tube, the defect continued to expand in size, with free extravasation of bile throughout the peritoneum. One month after Vicryl mesh abdominal closure, the patient continued to have a persistent, large duodenal fistula, in addition to C. difficile colitis, and multiorgan failure with need for hemodialysis and tracheostomy. We consulted our gastroenterology colleagues to discuss the possibility of stent placement to allow healing of the fistula, though this had been described only once in the literature for a similar indication. A through-the-scope (TTS) Taewoong fully covered 20mm x 100mm esophageal stent was placed under endoscopic and fluoroscopic guidance with a total of 6 endoclips placed at the proximal end to prevent stent migration. Post-procedure, she tolerated clear liquids by mouth with significant decrease in bile output. She was discharged home one month after stent placement. She returned with complaints of abdominal pain and was found to have stent migration into the proximal jejunum. It was successfully retrieved during EGD and no subsequent extravasation of contrast from the duodenum was noted on flouroscopy. She underwent abdominal wall reconstruction 5 months later and by one year after her initial injury she returned to work. In conclusion, unrecognized iatrogenic duodenal injuries sustained during LC, likely secondary to electrocautery, can be catastrophic. In cases of massive duodenal defects and high-output biliary fistula not controlled by duodenostomy tube placement or wide surgical drainage, endoscopic- and fluoroscopic- guided placement of a fully covered esophageal stent may allow for delivery of enteral nutrition and provide a life-saving option for this devastating complication. 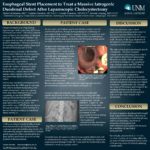