Effects of Experience and a Reference Tool in Laparoscopic Length Measurements

INTRODUCTION: Various gastrointestinal operations necessitate the measurement of a specific length of small intestine; however, the accuracy of surgeons, and surgeons-in-training, performing these measurements laparoscopically is unknown. In this study, we evaluated the accuracy and precision of laparoscopic length measurements performed by surgical attendings, residents, and medical students using a box-trainer model with and without a measuring tool.

METHODS AND PROCEDURES: Surgical attendings and residents who perform laparoscopy, and medical students were studied. To simulate measurement of the small intestine, a 500cm length of rope was placed within a laparoscopic box-trainer and affixed at one end. Study subjects completed two length measurements (LM). For LM#1, they were asked to measure 150cm from the affixed rope end using two laparoscopic graspers. The actual length measured and time required was recorded. For LM#2, subjects repeated the task with the aid of a 10cm suture to act as a reference. Measurement accuracy was tested by comparing mean measurement lengths between training level groups using an independent t-test. Measurement precision was tested by comparing the mean deviation of measurements from 150cm. Within-subject change was evaluated using a paired t-test.

CONCLUSIONS: In this study, there were no differences in the accuracy or precision of simulated laparoscopic small intestine length measurements between surgical attendings, residents, and students. More experienced operators required less time for completion of the task. Use of a measuring tool improved precision of measurements regardless of experience level. 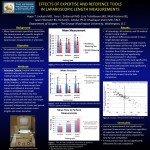