Introduction: This study aims to add to our understanding of perioperative experience & postoperative outcomes with the super-super obese (BMI≥60). These patients are regarded as high risk for bariatric surgery, but there is limited published data regarding the safety & effectiveness in this population.

Methods and Procedures: This retrospective chart review at a single high volume academic center looks at GBP, SG & adjustable gastric banding (GBa) done from 2008-2012 in super-super obese patients. Experiences and outcomes associated with the different operations were compared. Patient demographics, preoperative risk factors, & intra-operative procedures were noted & compared.
Endpoints of procedure length, postoperative complications, LOS & EWL at 6 months were compared between patients undergoing GBP & SG. Modified Reinhold criteria for success was applied to the results & then adapted for this study. Success was defined as EWL>30% at 6 months. This data was analyzed using x2 analysis. Analysis with Fisher’s exact test was used to compare complication rates between the two groups.

Conclusions: Bariatric surgery appears to be safe for use in the super-super obese. The overall complication rate of 7-15.79% was comparable to reported rates of 3.2-16% for patients of all BMIs undergoing laparoscopic gastric bypass.
Super-super obese patients undergoing GBP lost more excess body weight at 6 months, but experienced more postoperative complications compared with those undergoing SG. 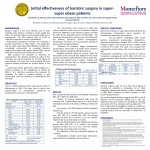