Effect of Pre-operative Bilirubin levels on post-operative mortality and morbidity after pancreatico-duodenectomy for pancreatic cancer. An analysis of 4850 patients from NSQIP database.

Malignancy in the head of the pancreas can cause obstructive jaundice. There have been multiple studies in the past to evaluate the effect of high bilirubin levels on the post-operative mortality and morbidity however, the large database studies are lacking. In this study we used ACS NSQIP database to find whether high bilirubin levels in patients undergoing pancreatico-duodenectomy [PD] for pancreatic cancer have any effect on their intra-operative or 30 day post operative complications.

Patients who underwent PD for pancreatic cancer were selected from NQIP database for year 2005 to 2011. Patients who were ventilator dependent, having current pneumonia or SIRS/ sepsis as well as who had undergone previous chemotherapy or radiotherapy were then excluded. They were then analysed for intra-operative and 30 day post-operative complications after standardizing them for various pre-operative variables such as sex, race, BMI, ASA classification, pre-operative creatinine, hematocrit and serum albumin levels. Primary outcome variable was 30-day mortality. Secondary outcomes included intra and post-operative transfusion, operative time, surgical site infections, sepsis, various pulmonary and cardiac complications, renal failure, return to OR, hospital stay and DVT. Analysis was done using SASS software. For the numeric variables we ran an analysis of covariance (general linear model) with both categorical and numeric explanatory variables. For the dichotomous response variables, the same model was run, but we assumed a binary response and hence a generalized linear model was conducted with the same explanatory variables.

Results
Total of 4580 patients were included in the analysis. There was no increase in 30 day mortality with increase Bilirubin levels. However, post operative morbidity with high bilirubin levels was statistically significant for increases in post-operative bleeding (2.68 vs 3.37; p<0.001), incidences of deep venous thromboses (2.23 vs 2.76, p<0.001) total operative time (p<0.05) and intra operative complications (2.74 vs 6.25; p<0.05) including unplanned intubation and myocardial infarctions. Further, no association with surgical site infections or overall length of stay was seen with increased bilirubin.

Conclusion
Higher Bilirubin levels are associated with increased post-operative complications, however with no increase in mortality. These data suggest that biliary drainage procedures should be considered for patient undergoing PD for pancreatic cancer. 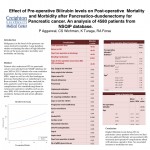