Methods: An IRB approved, retrospective review was completed on patients who had bariatric surgery by a single bariatric surgeon in a center of excellence from 2012-2014. Patients who underwent a laparoscopic sleeve gastrectomy (LSG) and laparoscopic roux-en-y gastric bypass (LRYGB) were categorized into two groups: those who had four months of pre-operative MWM with a bariatrician and those who did not. Weight loss was evaluated prior to the start of their liquid diet.

Pre-operative and post-operative percentage of excess weight lost (%EWL) was compared between the two cohorts. Specifically, the impact of MWM on weight loss was evaluated from the first surgical visit to the pre-operative visit, as well as %EWL from operation to 1 and 3 years post-operatively.

Conclusion: The patients with MWM did have more weight loss pre-operatively, which may be statistically significant with a larger cohort. This difference was not appreciated in the post-operative period for either surgical procedure (LSG or LRYGB). MWM may have a small effect on pre-operative weight loss, which may reduce operative risk. Additional investigation and longer follow up is needed to determine the effect of MWM and the appropriate role of MWM for bariatric surgery patients. 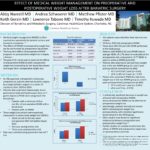