METHODS AND PROCEDURES: All patients met the NIH criteria for Bariatric surgery and were operated upon by a single surgeon (PG) between June 2006 and January 2008. Demographic data, weight, and height were measured preoperatively. CRP levels were obtained pre-operatively and at 3 and 12 months following LRGB.

CONCLUSION: C-Reactive protein serum levels were significantly reduced at 3 and 12 months following LRGB. The reduced pro-inflammatory state may play a significant role in the mechanism of resolving co-morbidities associated with morbid obesity. 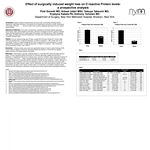