Ectopic Pancreas in the Stomach Presenting As an Inflammatory Abdominal Mass

A 32-year-old woman with ectopic pancreas in the stomach, presenting as inflammatory mass, is presented. A computed tomographic (CT) scan demonstrated a mass adjacent to the gastric antrum, which was diagnosed inflammatory mass lying near the gastric antrum.
Gastric endoscopy demonstrated a submucosal mass (2cm in size) with a central pit. Blood chemistry was suggestive for inflaumation and ectopic pancreas with abscess formation was suspected.Antibiotics was administrated and the size of mass decreased and symptom was improved.
The similar symptom due to ectopic pancreas relapsed later a couple of times. Then surgery was indicated and hyblid NOTES(Natural Orifice Translumenal Endoscopic Surger)was selected for removal to reduce invasiveness.Resected specimen measured 33×25 mm.
Histological examination revealed an ectopic pancreas with abscess formation.
From a review of the English and Japanese literatures, we believe that our case is the second report of an ectopic pancreas, presenting as an inflammatory abdominal mass. 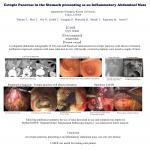