INTRODUCTION: With the rise in bariatric procedures being performed nationwide and the growing focus on quality & outcome measures, reducing hospital readmission rates has garnered great clinical interest. The aim of the present study was to identify the incidence as well as underlying etiology for early readmission (<30 days) following the most commonly performed bariatric procedures.

METHODS AND PROCEDURES: Using the American College of Surgeons' National Surgical Quality Improvement Program (ACS-NSQIP) database, we identified patients 18 years of age and older with a diagnosis of obesity and body mass index (BMI) ≥ 35 who underwent bariatric surgery between 2011 and 2012. Patients were grouped into two categories (no readmission versus readmission) for comparison of baseline characteristics and outcomes such as prolonged length of stay (LOS), prolonged operative time, and pre-discharge complication. The association between readmission and patient factors was explored using multivariable logistic regression analysis. Additionally, a subgroup analysis of the readmitted patients by procedure type was performed and reasons for readmission were investigated.

RESULTS: 32,076 patients were identified. The overall 30-day readmission rate was 5.02% (laparoscopic (lap) adjustable band 2.15%, lap gastric bypass (GBP) 6.16%, open GBP 9.46%, and sleeve gastrectomy 3.89%) and it occurred at a median of 11 days postoperatively. The most common reason for readmission was nausea/vomiting (14.05%), followed by abdominal pain (12.14%), and dehydration (10.78%).The readmitted patients had significantly higher rates of prolonged LOS (33.62% vs. 18.53%), prolonged operative time (31.32% vs. 24.40%), and pre-discharge complications (3.67% vs. 1.55%; all p<0.001). The adjusted analysis revealed that factors most strongly associated with readmission were steroid use, prolonged length of stay, procedure type, pre-discharge complication, American Society of Anesthesiology (ASA) class IV-V, prolonged operative time, and black population (Table).

CONCLUSION: This retrospective study concludes that the overall 30-day readmission rate following bariatric surgery is approximately 5%, with the highest rate seen in gastric bypass patients and the lowest rate in those with an adjustable gastric band. Gastrointestinal symptoms, pain, and dehydration appear to be the most common reasons for early readmission. Bariatric centers should consider implementing standardized protocols for outpatient monitoring of patients identified to be at high risk of experiencing early readmission, which in turn would decrease overall costs and improve quality of care. 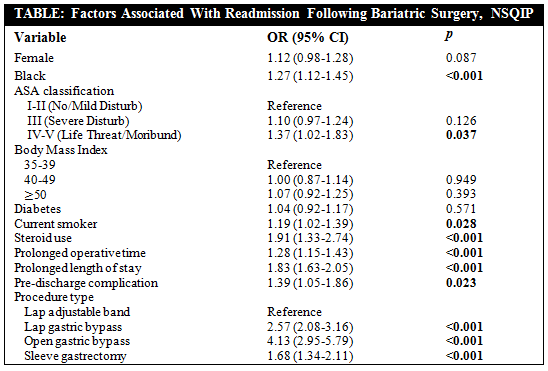