Early Laparoscopic Single-stage Resection for the Treatment of Acute Diverticulitis 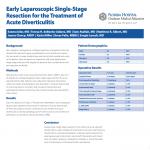