INTRODUCTION – Peroral endoscopic myotomy (POEM) is a promising natural orifice modality for symptomatic esophageal achalasia, but little has been reported about POEM in elderly patients. We examined perioperative outcomes in elderly patients who received POEM.

METHODS AND PROCEDURES- We mined institutional review board-approved prospective POEM and retrospective esophageal databases. A single surgeon performed Laparoscopic Heller Myotomy (LHM) with partial fundoplication or POEM on patients with symptomatic achalasia from July 2010 to August 2012. Elderly patients were defined as ≥70 YO and adult patients were ≥18 and <70 YO. SF-36, Eckardt, GERD, and dysphasia scores were collected pre- and post-operatively. Unpaired T-tests were used to analyze normally distributed data.

CONCLUSIONS – POEM is a safe and feasible option for patients with symptomatic achalasia over 70 years of age. Recovery from POEM seemed to be equivalent despite age. Elderly patients who undergo POEM are less likely to require a skilled nursing facility than patients who underwent Laparoscopic Heller Myotomy. 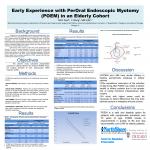