(Method) From the April 2011 to July 2012, 15 cases of colo-rectal cancer and benign diseases were operated by single incision laparoscopic surgery. 8 male and 7 female patients were enrolled. Mean age was 72. The 10 patients were hypertension. The one patient was diabetes mellitus. All procedures were performed by straight laparoscopic tools without any curved instruments.

(Results) The mean operation time was 240 minutes and mean blood loss was 135cc. The procedures were 8 right hemi-colectomies, 5 anterior resections, one total colectomy with ileo-rectal anastomosis and one extended left hemi-colectomy. In cancer patients, mean harvested lymph nodes were 39. The two patients were stage 1. The stage 2 and stage 3 patients were five and four respectively. Mean proximal and distal margins were 12cm and 7.7cm individually. The mean tumor size was 4×3.2cm. The mean follow-up period was 12 months. In benign diseases, two patients were crohn`s disease, one patient was intussusception due to colonic lipoma and another patient was panperitonitis due to perforated appendicitis. There were no operation related complication and death. 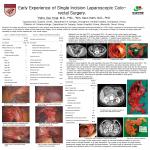