Introduction: There is a growing interest in enhanced recovery after surgery (ERAS).  Reducing postoperative length of stay (LOS) is a major tenant of ERAS.  However, reducing LOS may increase post discharge resource utilization. The high volume and standardized protocols in bariatric surgery, make it particularly well suited for ERAS. We recently revised our ERAS protocol for bariatric surgery with a goal LOS of one day. Prior to this, the target LOS was two days.  Prior to this, the goal LOS was two days.  The goal of this study was to compare hospital readmissions, emergency room visits and patient office calls before and after implementation of ERAS.

Methods and Procedures: We performed a retrospective chart review of a single surgeon series of laparoscopic sleeve gastrectomy (LSG) and laparoscopic gastric bypass (LGB).  The “ERAS” group had a target LOS of one day, while the “standard discharge” (SD) group's target LOS was two days.  An equal number of SD patients were included to match the number of ERAS patients.   The primary outcomes were hospital re-admissions, ED visits, and patients calls to the office within 30 days of surgery (as noted in the electronic medical record).  When comparing the primary outcomes between the ERAS and SD groups, patients who had LOS beyond the target were excluded. The groups were analyzed using a paired student T test, with statistical significance defined as a p < .05.

Results: ERAS was initiated in January of 2015 with 107 patients identified in this group.  An additional 107 patients who immediately preceded ERAS represented the standard discharge (SD) group.  These two groups had similar demographics.  Compared to the ERAS group, the SD patients had a significantly higher percentage of patients who met their target LOS (table 1a).  The SD group (overall and LGB) had a significantly higher rate of hospital re-admissions (table 2b and 2d), this was the only significant difference in primary outcomes between the two groups.

Conclusions: Our study demonstrates that reducing the target discharge to postoperative day one is feasible and does not significantly increase the rate of hospital readmissions, ED visits or patient calls to our office. Further research is necessary to refine bariatric surgery ERAS protocols and to determine if this patient population can safely be discharged sooner than postoperative day 1. 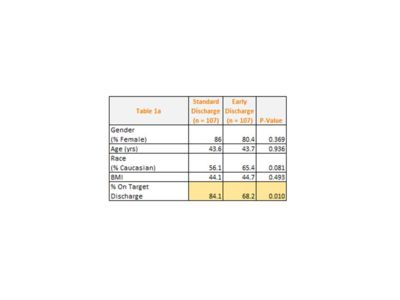 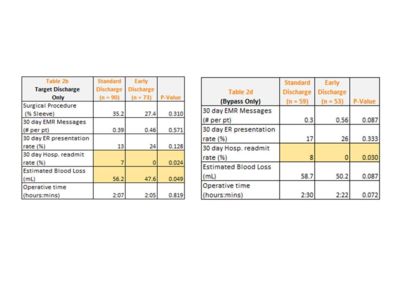