Introduction: Reducing hospital length of stay (LOS) is a goal for minimizing resource utilization and costs following bariatric surgery. We aimed to compare post-operative outcomes between patients who had early (LOS≤ 1 day) and standard discharge (LOS>1 day) and to identify factors associated with early discharge after bariatric surgery.

Discussion: Patients who undergo VSG and those without preoperative GERD are more likely to be discharged early. There is no association between early discharge and postoperative morbidity or readmission. Further larger studies are needed to identify which factors are associated with increased resource utilization following bariatric surgery. 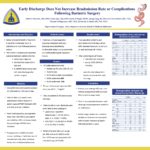