Introduction:
Leaks are rare after advanced laparoscopic foregut surgery but carry a high morbidity. Leaks are usually suspected clinically and confirmed through imaging or reoperation. The early diagnosis and prompt management of a postoperative leak facilitates optimum clinical outcomes. Drain amylase levels are a sensitive indicator of gastrointestinal leaks. Our hypothesis is that drain amylase is a better predictor of leak as compared with vital signs, blood or imaging tests.

Methods and procedures:
A total of 401 patient charts undergoing complex gastroesophageal surgery, with routine drain placement were reviewed. Patients were divided in groups (leak and no leak). Leak was defined as the presence of gastric or esophageal contents in the mediastinum or peritoneum secondary to a gastric or esophageal wall perforation or suture line disruption, confirmed on a postoperative esophagram or on return to the operating room for clinical suspicion of leak. Statistical significance was considered with a p value <0.05. ROC curves were obtained to define cutoff values of each variable.

Results:
There was no statistical difference between demographic data or type of surgery between the groups. Seventeen patients had a confirmed postoperative leak (4.2%): 14 on reoperation and 3 on esophagram. Drain amylase, heart rate and WBC, (p<0.05) were statistically associated with leak. ROC curves identified cutoff values of 138 U/L for drain amylase (76% sensitivity and 85% specificity), 10.8 X10^3 cell/L for WBC (56% sensitivity and 82% specificity) and 100 beat/min for HR (70% sensitivity and 62% specificity). Combining drain amylase with HR and WBC increases specificity from 85% to 96%. The addition of elevated drain amylase (> 138U/L) to a combination of raised HR (>100) and WBC (>10.8) increased the positive predictive value from 11% to 39.1%. Only one of the 14 patients with confirmed leak on reoperation demonstrated a leak on esophagram.

Conclusions:
The addition of postoperative drain amylase results in a fourfold increase in the positive predictive value for leak in foregut surgery as compared with using a combination of elevated heart rate and WBC. Drain amylase may facilitate the early detection on postoperative leaks and thus impact on the clinical outcome of this devastating complication. 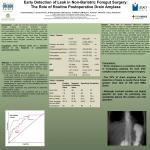