Conclusions: Our early experiences suggested that DP-AR for rectal cancer might be a technically feasible and safe procedure for Stage 0-III rectal cancers. 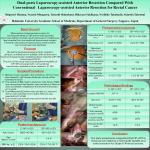